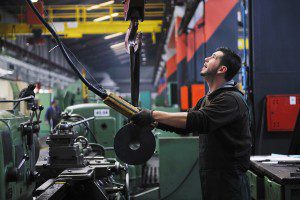 As shipping costs and global communications have become more and more affordable in the last decade, the manufacturing industry has seen a big shift to offshoring paired with the subsequent decline in overall domestic production. In an already competitive and difficult industry, manufacturing companies that have made an effort to bring production back to the states often face an array of labor challenges. Increased labor and electricity costs, coupled with new environmental regulations; businesses considering reshoring versus offshoring face a difficult decision.

On the other hand, the rise in labor costs in many emerging countries and the long supply chain and transport durations, make changes to production overseas virtually impossible. This is an ongoing issue considering the fluctuations in demand which commonly occur in a number of industries. Although offshoring was once seen as a progressive business decision, it has now become a questionable one, as numerous drawbacks must be taken into consideration when production is done abroad.

RP Abrasives recognizes the importance of retaining and restoring quality US-based manufacturing facilities, and the overall benefit of reshoring. When done correctly there are a number of undeniable advantages to both consumers and business alike. When production is done domestically, any issues, quality improvements, or engineering changes can be made much more efficiently. Not only do manufacturers have much better control over their supply chains, they also see lower indirect costs associated with shipping, quality control, inventory levels and carrying costs.

Another notable advantage of reshoring is the increase in well paying jobs and new opportunities that become available. Customers also win by having access to new and improved products that come to market much faster. Given the nature of the metals industry and accessibility to affordable natural gas, RP Abrasives is also able to process the same quantity of products faster, at a lower cost, and often higher quality than many of their overseas counterparts.

Since 1996 RP Abrasives has been committed to maintaining a quality management system that covers all facets of customer service and the integrity of the products and services provided. This is done via ISO 9001:2008 certification. As a metal finishing and surface conditioning company, RP Abrasives not only welcomes and supports reshoring efforts, but sees them as paramount in the development of our great nation and its workers.